Fraser Island is a unique part of the Fraser Coast region, and its unusual formation of sand and rainforest make it a special source of adventure for visitors to explore. Although well known among fisherman and 4WD enthusiasts, it is the history and Aboriginal heritage that gives Fraser Island its individual character, expressed through wonderful coloured sand cliffs, unique fresh water lakes and diverse flora and wildlife.

Spanning 124 kilometres and covering an area of 163,000 hectares Fraser Island has developed over a period of 800,000 thousand years, and it’s still being perfected. It may be impossible to explore every inch of its beauty, yet just a taste can leave you feeling charmed and captivated.

Charmed because of its unique environment; and captivated by its rich Aboriginal heritage and colourful European history. It is this combination that have made Fraser Island one of the most rare and mysterious features of the Queensland coastline.

Sand is the key to how the Island was formed but it is the abundance of fresh water in its many lakes and crystal clear creeks and streams that has made it so special. Pristine clear mirror lakes and the peat coloured perched lakes, are some of the largest in the world. Each of the lakes has its own particular character. 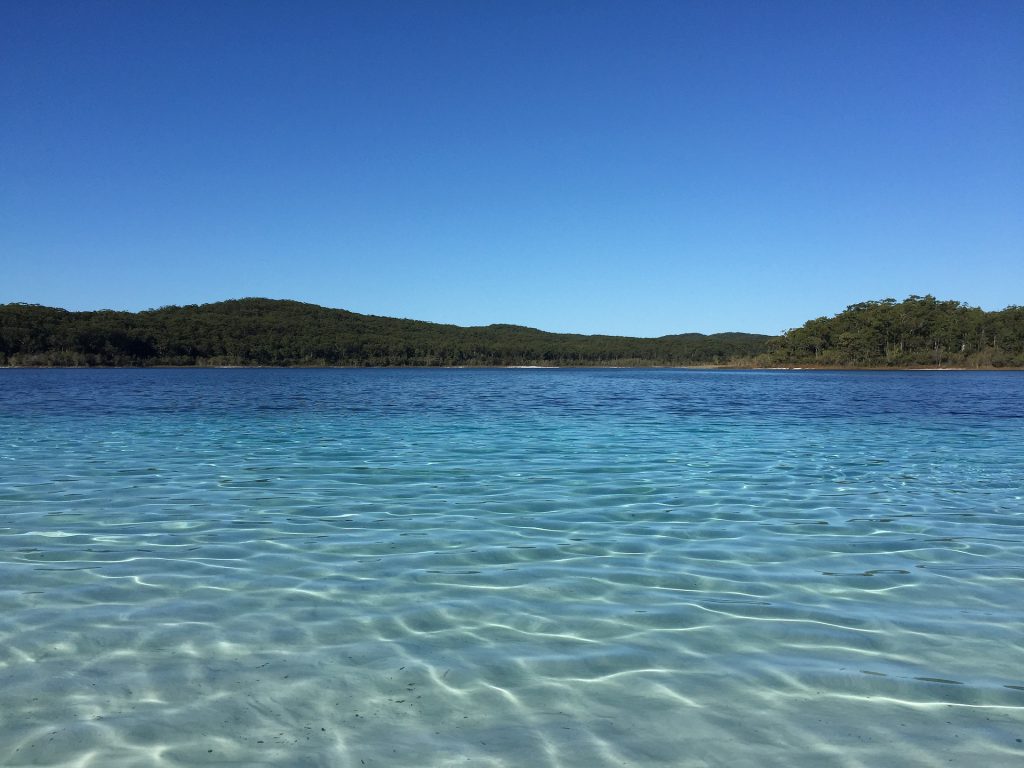 Mysterious, moody and beautiful, they are excellent subjects for photography, great places to see birds, other fauna and flora and a welcome oasis for hot summer days.

Scenic 4WD circuits and walking tracks in the southern half of the island take in some of the largest of the lakes including McKenzie, Birrabeen, Benaroon and Boomanjin, there is a walking track to Lake Wabby from the beach. Water has meant the creation of exceptional rainforests thriving in the nutrients from the breakdown of other plants which has enriched the sand of the forest floor.

Towering satinay and brushbox trees are among the forest giants, some over a thousand years old, and so large they form distinct bands visible from scenic flights over the island. The variety of vegetation on Fraser is exceptional, ranging from mangroves to 200 year old kauri forests, and wallum heathlands that fill with wildflowers in the early Spring.

Fraser Island is home to more than 230 species of birds – one of the largest and most varied in Australia. Along the coastal landscape you can see dotterels, pied oyster catchers, pelicans, terns and gulls while overhead the skies are prowled by magnificent birds of prey brahminy kites, white-breasted sea eagles, ospreys and peregrine falcons. Alternatively, wander through the islands heathlands, home to kingfishers, jabirus and brolgas, and one of Australia’s rarest birds the ground parrot.

There are 25 species of mammal present on the island. Isolation has ensured that Fraser’s dingoes are the purest breed in eastern Australia and consequently no domestic dogs are permitted on the island.

Other native mammals include wallabies, possums, flying foxes and echidnas. Dugong feed on the seagrass beds, sea turtles breed on some island beaches as well as the mainland, and each year make their annual migration to Fraser’s rocky headlands and protected coastline.

Fraser Island is more than a unique environment for visitors , it was home to aboriginal tribes who lived on the island for over 5,500 years. They the island as a paradise with the native flora and fauna providing endless bounty in fish and seafoods, nuts and fruits and a good supply of fresh water.

Their heritage is evident in archaeological sites on the island, and midden heaps, ceremonial bora rings, and stone implements can still be seen on tours throughout the island. By comparison, the European history of the island is recent, Fraser’s discovery being credited to Captain Cook who named many of the landmark features. Fraser’s European name is the result of a dramatic shipwreck saga and consequent capture by local Aborigines of the captain and his wife, Eliza Fraser. Her ordeal brought world attention to the island, renamed in her honour.

As beautiful as the coast is, the waters which fringe the islands coastline have been the site for more than 50 shipwrecks. The most notable wreck is the Maheno, a former trans-Tasman luxury liner and a World War 1 hospital ship. Today the ships rusted remains lie on the beach north of Happy Valley and are a popular attraction for visitors to the island.

Listed as a World Heritage site in 1992, Fraser joins the ranks of the Great Barrier Reef, Uluru and Kakadu National Parks as a unique and exceptional environment. As part of Queensland’s natural and cultural heritage, it is protected for all to appreciate, enjoy and respect.

Fraser Island is one of less than 400 areas worldwide to be judged of such significant value to be protected in this manner. It is therefore the responsibility of all to preserve this wonderful gift of nature in the best possible way.

“Take only photographs and memories,leave only foot prints.”